For just over 40 years, from the time of Reggie Whitcombe’s appointment in 1928 until Peter Alliss’s departure, Parkstone’s golfers, professional and members alike, were prominent at the highest levels of the game. It was a Golden Age for Parkstone.

Reggie and Peter were able to bring many of the great golfers of their day to Parkstone to play in exhibition matches. These included Open Champions Henry Cotton, Peter Thomson and Tony Lema and the greatest of them all Bobby Jones, who played in a match just after the Second World War with Reggie and Percy Alliss. At the time Jones was a serving USAF officer and played in his service uniform. A young Peter Alliss attended the match – as Bobby Jones’ caddie.

As if the fame of the Club’s professionals was not enough, seven members gained international fame with the ladies predominant. Ernest Millward, EMS Arkell, Jeanne Bisgood, Maureen Garrett, Phyllis Wade, Jane Sugden and Barbara Dixon were all internationals and/or national champions with Jeanne, Maureen and Phyllis gaining Curtis Cup honours and Ernie playing in the Walker Cup.

All in all, a lot of reflected glory, in which lesser mortals were able to bask happily and with pride. Below is more details for some of these individuals:

Arkell was born in 1895 and became a member of Parkstone in 1917, when her family moved to Canford Cliffs from Bristol. She won the Ladies Swiss Open Championship in 1931 after the final was moved from a Sunday in deference to Arkie’s objection to playing on the Sabbath. 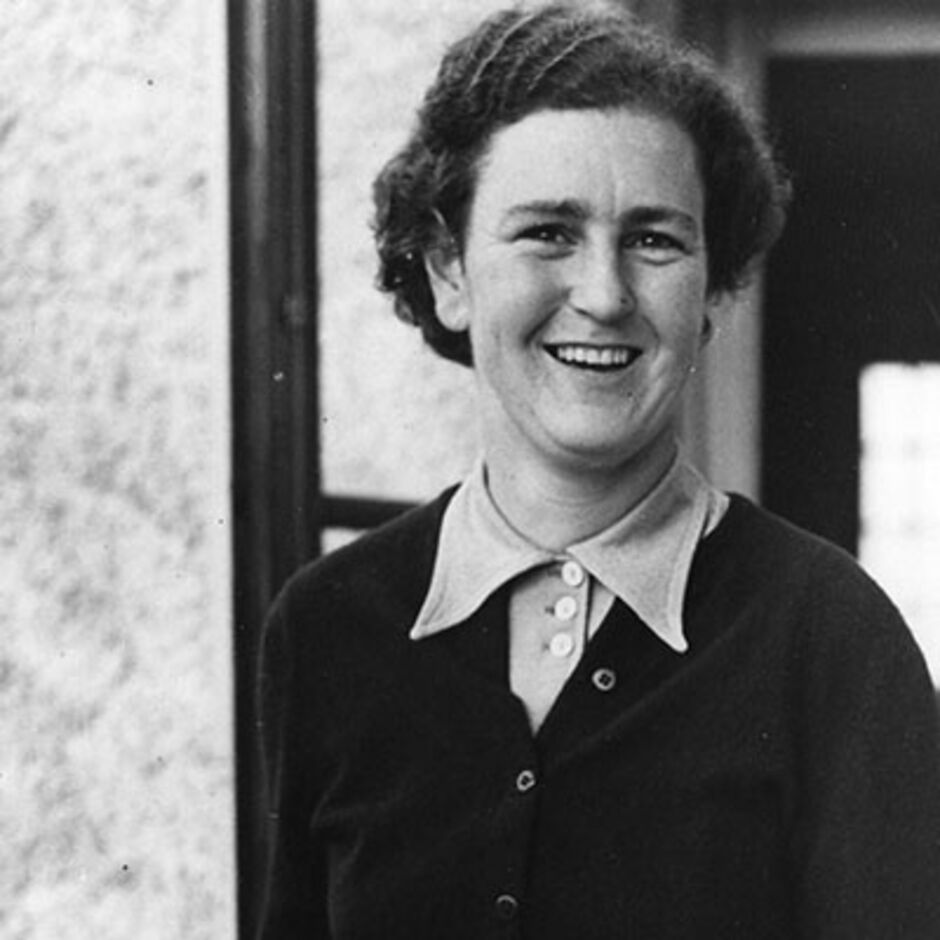 Jeanne joined Parkstone in 1940, having moved down from London with her family, and is still an active social member. After war service in the WRNS Jeanne quickly made her mark in golf winning her first English national championship in 1951. She went on to win eight national championships. The English in 1953 and 1957, the Swedish in 1952, the German and Italian in 1953, the Portuguese in 1954 and the Norwegian in 1955.

Having retired from competitive golf, Jeanne, a barrister by profession, had a distinguished career in local government, was a Deputy Lord Lieutenant of Dorset and was appointed CBE in 1982. Jeanne is an Honorary Member of Parkstone and was President from 2000 to 2003, probably the first lady president of a leading golf club. 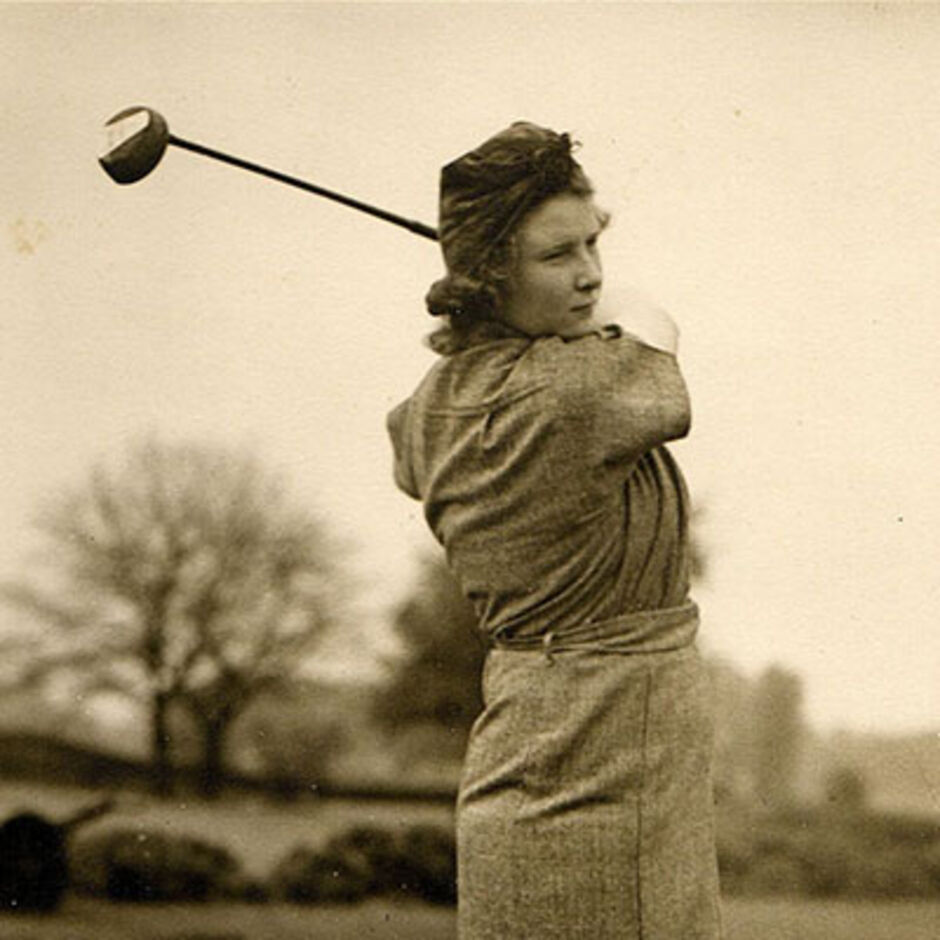 Maureen joined Parkstone in 1935 and won the Middlesex Ladies title at the age of 17. She went on to win the French Ladies in 1946 and played for England in the home internationals in 1947, 1948, 1959 and 1953, in which year she also played against Canada and New Zealand. Maureen played in the Curtis Cup in 1948 and captained GB and I in 1960. After her retirement from international golf Maureen became President of the LGU from 1982 - 1984. She founded and was the sole committee member of the Curtis Cup Association until she died in 2011.

In her mind overriding all these achievements was the accolade of being honoured by being awarded the Bobby Jones Award for Distinguished Sportsmanship in Golf by the USGA in 1983, the first non American woman to receive it and only the sixth lady in total. Her joy and appreciation was enhanced as she had met Jones in Bournemouth during the war and visited him over the years in Atlanta. Maureen was an Honorary Member of Parkstone. 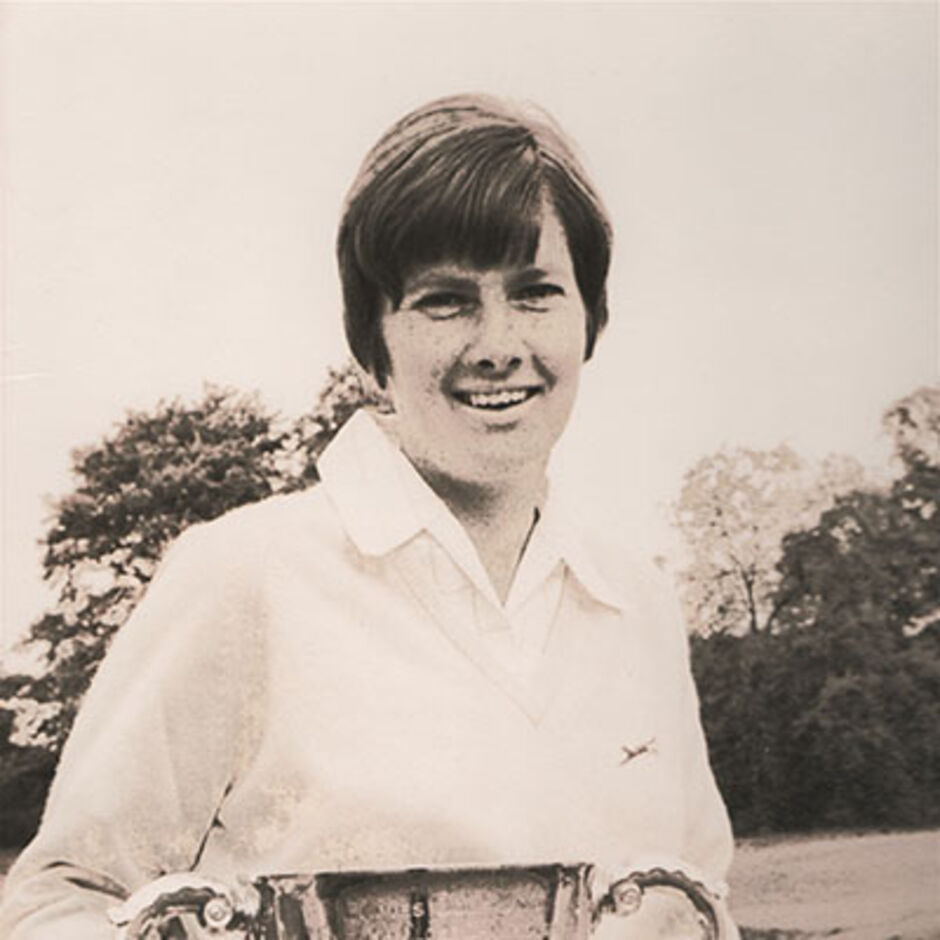 Barbara moved to Parkstone from the London area in the early 1960’s and won the Dorset title in 1966, 1968 and 1970. In 1969 she decided to spend a full year on the national circuit with immediate success, winning the English Ladies Championship with Jeanne Bisgood as her caddie in the final. This was followed by selection for England in the European Team Championship, the home internationals and the Vagliano Trophy. Marriage and a change of name to McIntosh brought a move to Scotland and further success as East Lothian Champion in 1975 and County Captain. She is an Honorary Member of the Club. 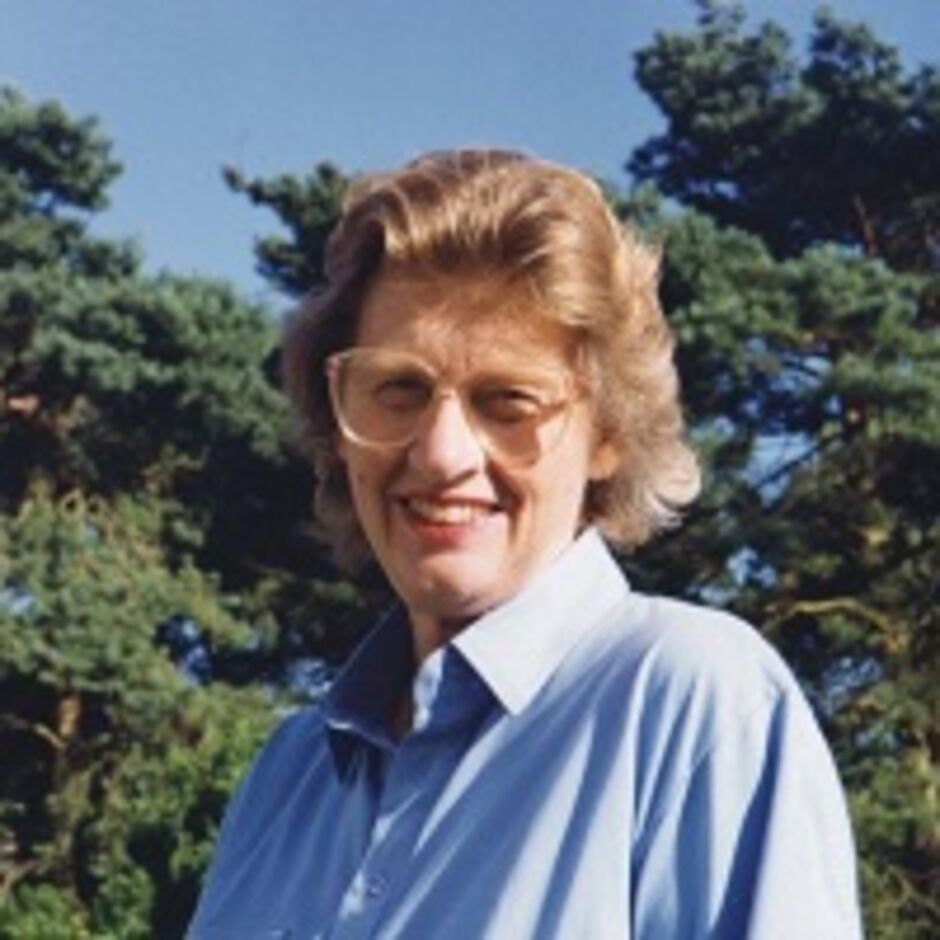 Jane played her early golf in the Midlands but her first success was the Dorset County Championship in 1964 with further titles in 1975, 1976 and 1983. She was the Northampton County Champion in 1968 and 1972. She played for England against Canada and New Zealand in 1953 and was a member of the home international team for three consecutive years from 1953. She was in the British Team to Scandinavia in 1952. Jane is an Honorary Member of the Club. 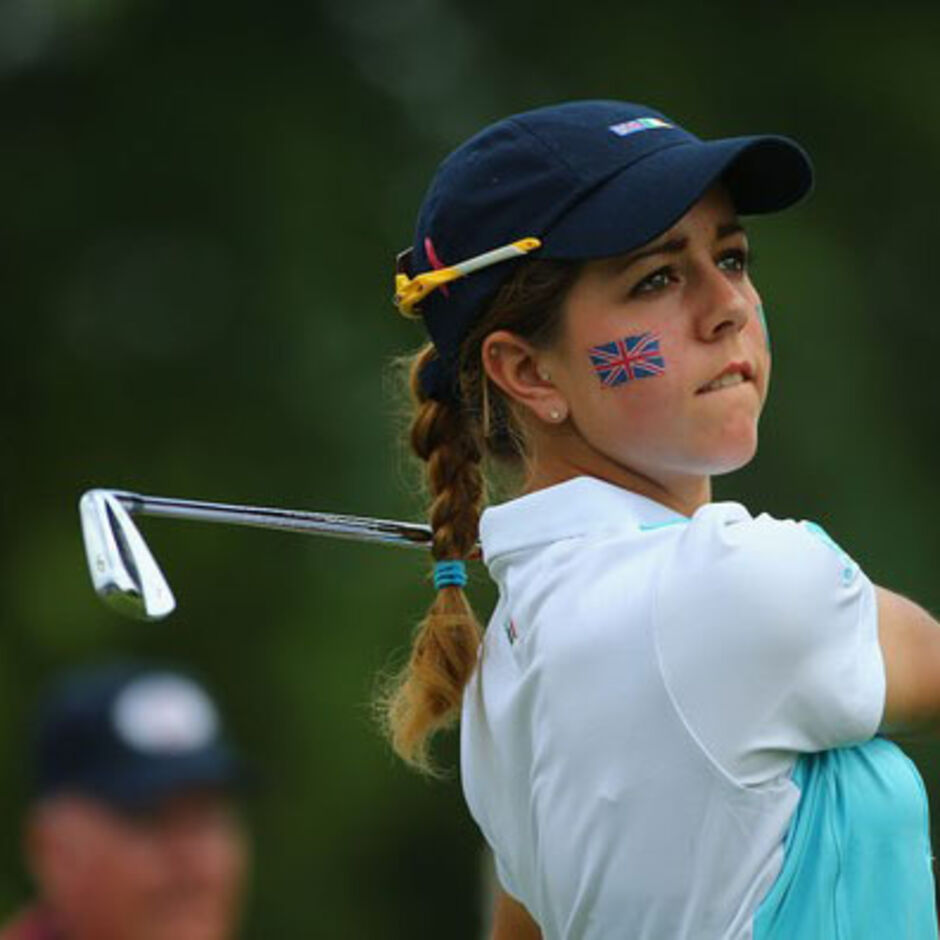 She represented GB and Ireland in the Curtis Cup of 2014, securing 2 points in a losing cause in the US. She turned Pro’ in July 2014 and now competes on the Ladies European and LPGA Tours.

She started the 2016 season in great form and collected her first professional victory in February, claiming a one-shot win at the Oates Victorian Open over Norwegian duo Nanna Madsen and Marianne Skarpnord.

Georgia missed the cut in the 2016 Women's British Open, but she responded superbly with four consecutive top-seven finishes on the Ladies European Tour, but it was her 2017 campaign in which she became a prominent figure on the world stage. Georgia made the cut in two majors and then finished a brilliant tied-third in the Women's British Open at Kingsbarns before earning another top-10 finish in the Evian Championship.

Georgia's most notable performance of in 2017 was on her full Solheim Cup debut, winning two matches alongside Anna Nordqvist and taking the experienced Paul Creamer to the final hole of their hard-fought singles clash on the final day. Her consistency throughout the year saw her crowned European No 1, and she then earned her full card for the LPGA Tour when, having won Stage Two of Qualifying School, she held her nerve to finish in the top five of the final stage.

Georgia won her first major at Royal Lytham & St Annes Golf Club on the 5th August 2018, at the tender age of 22, with a superb 67 on the final day giving her a two shot victory,  We look forward to seeing how her career progresses. Georgia is an Honorary Member of the Club. 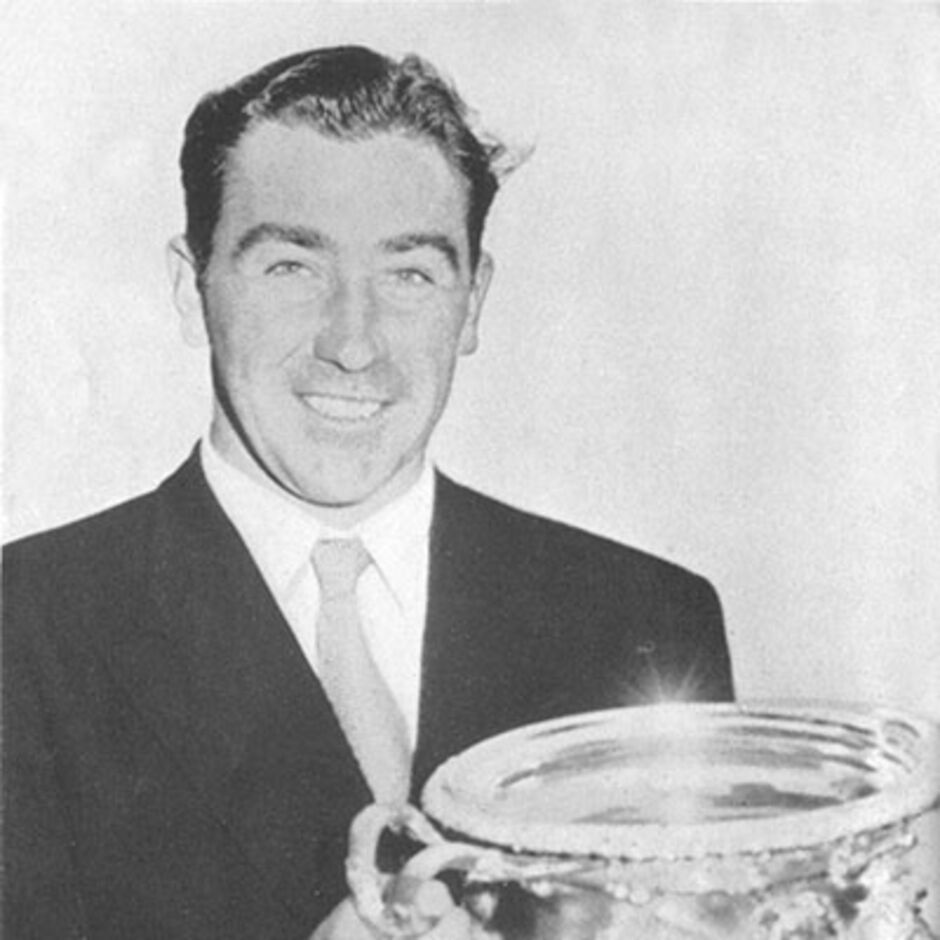 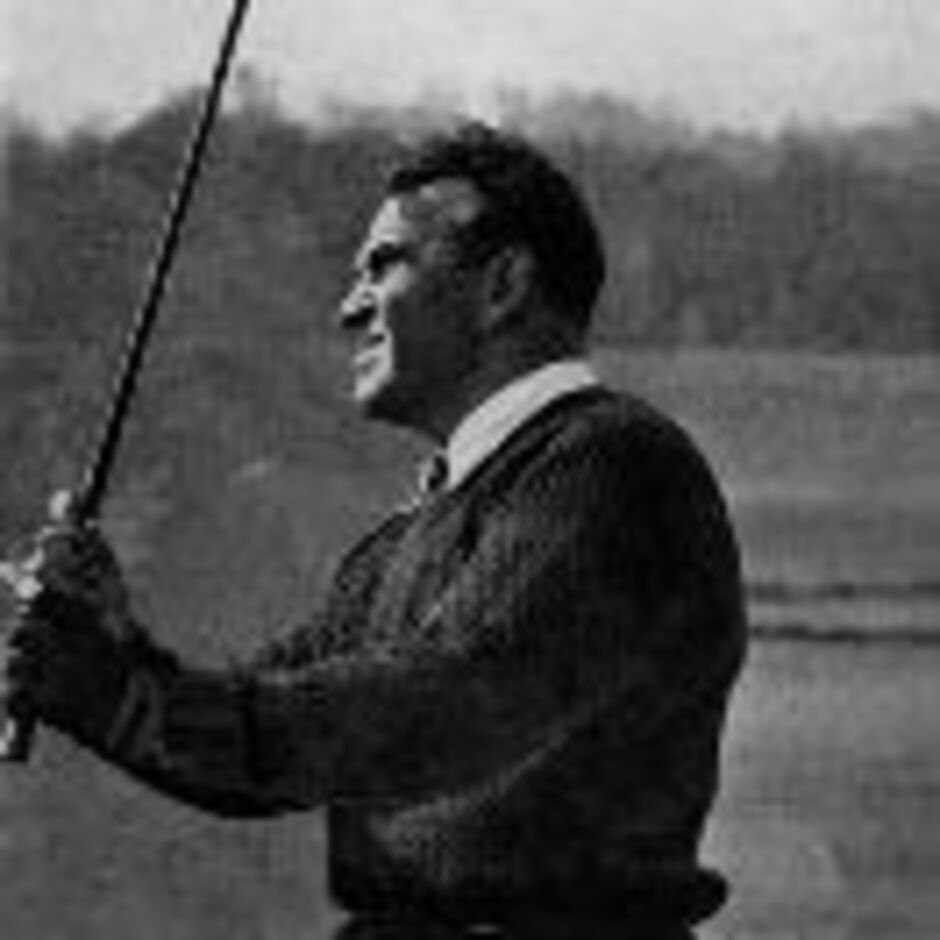 Bill came to Parktsone on retiring from professional sport. He was simply one of the finest all round sportsmen of the 20th century. Born in Sydney in 1907, he gained international honours for Australia at rugby union, swimming and boxing, was good on the track and a fine cricketer, all before becoming one of the leading rugby league players in the world. Asked why he didn’t play cricket for his country he replied simply ‘Didn’t have time.’ A very Shanklands response.

From 1937 when he first gave golf serious attention to 1955 Bill appeared in every Open Championship, finishing third twice. As many others have done, Bill came to Parkstone on his retirement in the 1960’s. Initially a social member with courtesy of the course, over the next 30 plus years he became a great friend to many, ever willing to help fellow members with their game. He was made an Honorary Member in 1991.

The Shankland Memorial Trophy, which was donated by his family, is played for annually over 36 holes as a Seniors Open Scratch Tournament.

The Club has been extremely fortunate in their choice of professionals and the fact that five of these spanned nearly 100 years of the Club’s history. 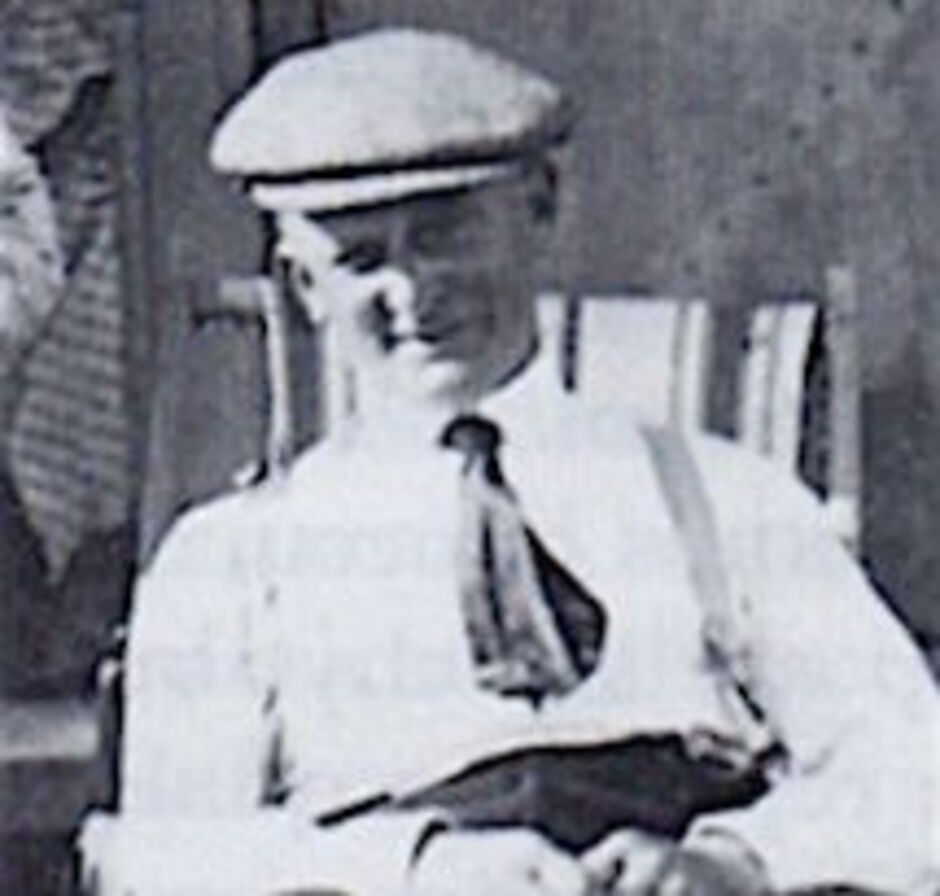 Hugh was appointed the first professional of the club and stayed at Parkstone until 1928. However, it was his successor who put the Club firmly on the map. 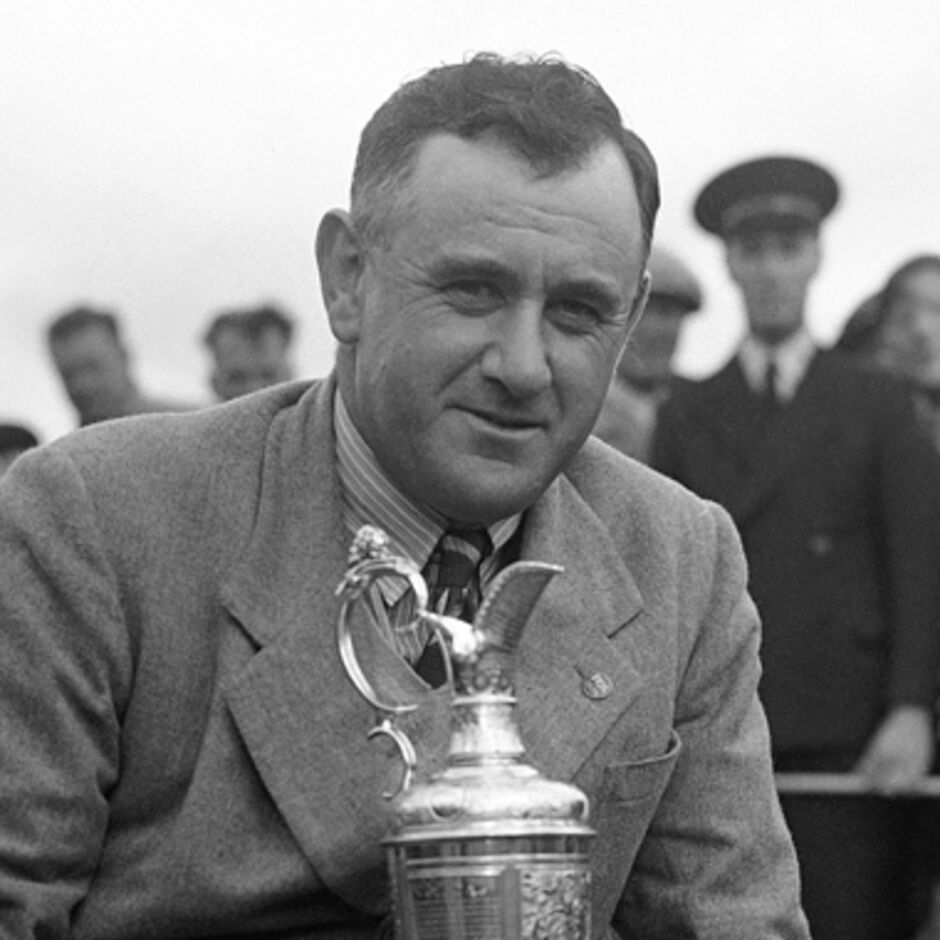 Reggie was one of three professional brothers, who played in the local area. He amassed 17 professional wins and a Ryder Cup appearance but, undoubtedly, the highlight of his career was when he won the 1938 Open Championship at Royal St George’s. His championship medal resides within the Parkstone clubhouse. He remained pro’ until his untimely death in 1957. 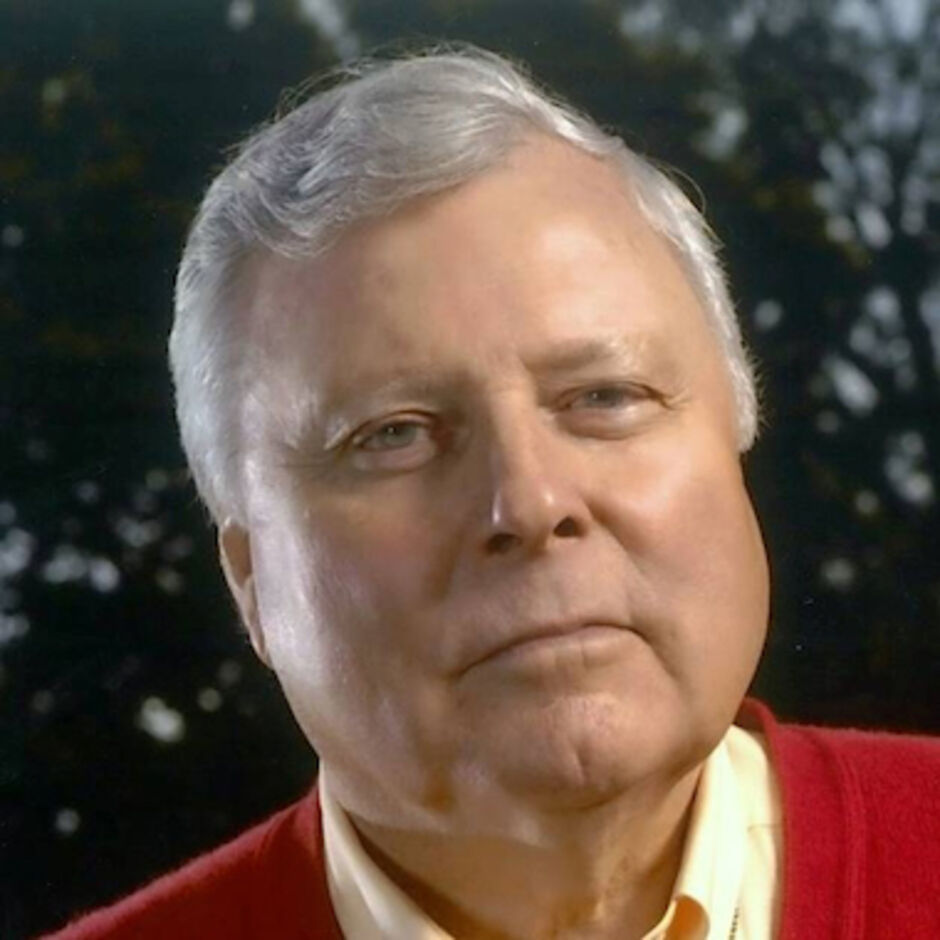 Peter was appointed professional, initially in conjunction with his brother, Alec, and took up his post in April 1957. Within a week of commencing duties, Peter returned bearing the PGA Championship trophy, the first of many that he won while being our professional. The fact that he went on to become the modern “voice of golf” and often mentions his days here have brought the Club much kudos, and a number of members still have tales to tell of hard-fought matches on a Sunday morning. Peter was with us until 1970, when he moved to Moor Allerton, near Leeds. Peter visited the Club regularly until his passing in December 2020. 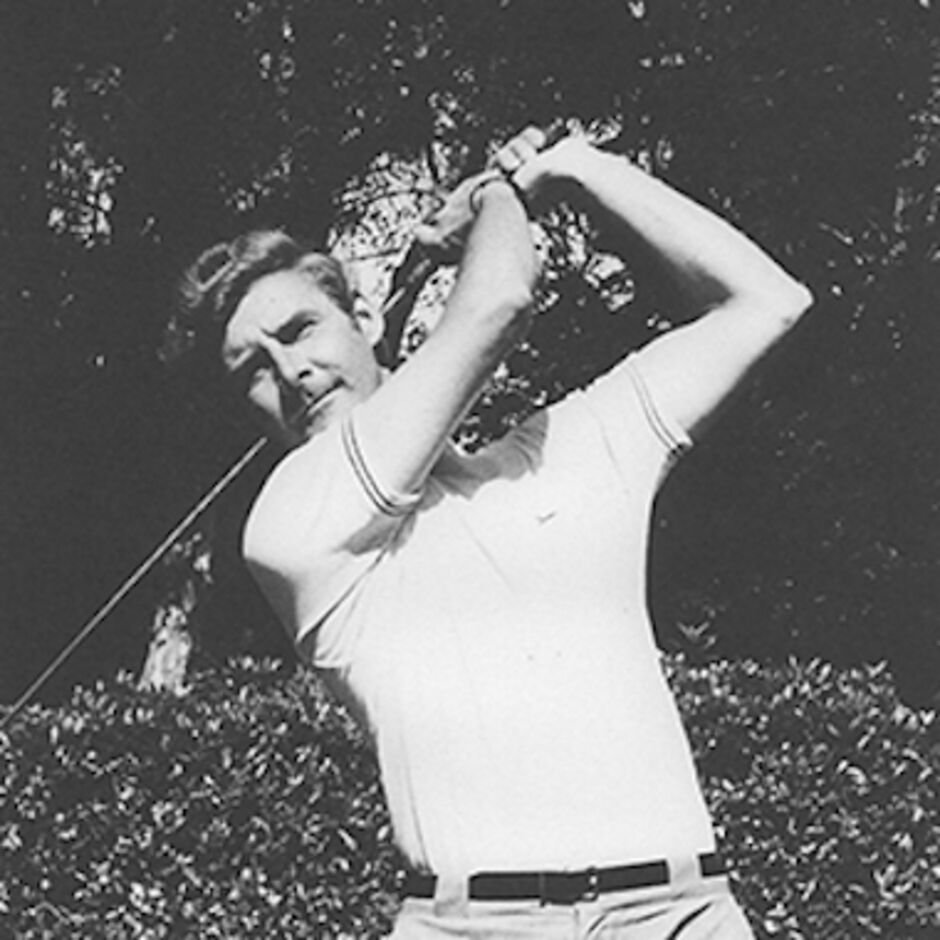 Keith succeeded Peter in 1970 and was an Honorary Member of Parkstone. He was keenly interested in the training and development of aspiring professionals by the PGA and was a member of its training and teaching staff, being responsible for the production of the PGA training manual. Also, in conjunction with the Bournemouth Management Centre, Keith produced a correspondence course for the PGA Diploma in Golf Management.

He became Chairman of the PGA in 1974 and also of the West Region of the PGA. In 1983, he captained the Great Britain and Ireland PGA team to victory against the USA at Muirfield and then repeated the feat at Turnberry, thus becoming the first Captain to lead two winning teams against the Americans. Keith remained an active member of the Club until he sadly passed away in 2018. 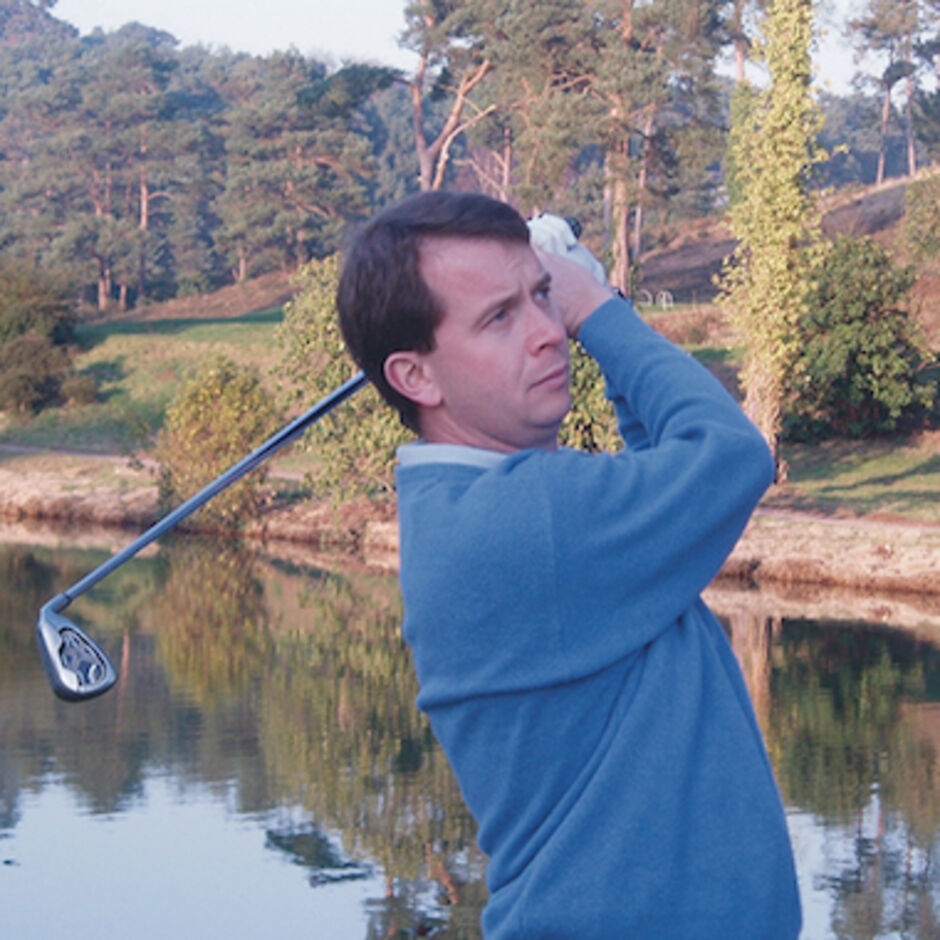 Martyn was appointed professional in 2001 after a very successful amateur career. One of his many achievements was in the 1999 Open Championship at the Carnoustie Golf Links in Angus, renowned for being tough, where he played in all four rounds.

In 2015, Martyn was appointed Vice Captain of the GB & I PGA team that beat the Americans on their own turf for the first time since 1983. He was also Vice Captain of the team in the return match in 2017 at the Foxhills Club in Surrey and played his part in a resounding victory! The back to back victory against the Americans was achieved for the first time since another Parkstone professional, Keith Hockey, captained the side in the 1980s. Martyn coaches many elite players at both Club and County level.

Martyn left the role of head Professional at Parktsone in mid 2020 and was replaced by his longtime assistant,  James Baldwin.